Media Research Center President Brent Bozell eviscerated CNN on Friday, deriding them for “flat-out lying” about Donald Trump’s rollout of the COVID vaccine. Appearing on FBN’s Varney and Co., he excoriated CNN for credulously accepting Biden administration claims that they are “starting from scratch” when it comes to distribution.

Bozell called the liberal network out: “You’re entitled to your opinion. You’re not entitled to lie. And CNN flat-out lied to its viewers. Its viewers need to understand it is not biased, they’re not spinning it, they’re flat out lying. That just wasn’t true.”

As the MRC’s Tim Graham explained in a column on CNN’s lies:

If the Trump administration had a “nonexistent” vaccine strategy, how was the vaccine distributed across the country? This is self-evidently false. CNN somehow didn’t have the talent or intelligence to Google the 11-page HHS document on their Operation Warp Speed vaccine strategy. Instead, CNN reporter MJ Lee was relying on anonymous Trump-trashing sources for her dishonest spin.

A transcript of the Varney and Co. segment is below.

ANTHONY FAUCI: We certainly are not starting from scratch because there is activity going on in the distribution.

CHRIS CUOMO: Another thing that I don’t buy comes out of our reporting, I have two new pieces of reporting. The first one is that people within the administration say they’re starting from scratch with the vaccine. 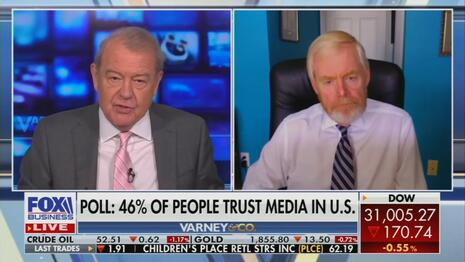 VARNEY: I want to bring in Brent Bozell on this one. Get rid of that on the screen, please. Let’s bring in Brent Bozell. What we just saw, Brent, was a CNN story about the Biden administration having to start from scratch. A very negative story about the Trump administration debunked by Chris Cuomo on CNN and by Dr. Fauci. Kind of typical of the way the media’s coming at President Trump, I think.

BRENT BOZELL: Well, I think, Stuart, we have to look at some realities here. On September 16th the White Iouse released the strategy and the plan that was in place. September 16th. In November Kayleigh McEnany had to remind the press — imagine that, had to remind the press — that the plan was ready. The plan called, had it all set up for distribution in every state, in every territory, tribal distribution, even local distribution. It is why general Moderna announced that within 24 hours of having the vaccine approved, they could begin distribution, and they did. Stuart, you know, you’re entitled to your opinion, you’re not entitled to lie. And CNN flat-out lied to its viewers. Its viewers need to understand it is not biased, they’re not spinning it, they’re flat out lying. That just wasn’t true.

VARNEY:  Don’t hold back, Brent. I just hate to see you holding back like this. I really do. However — Please, producer, can you put that headline up again from the Washington Post, the one about the embarrassing media coverage of the — there you go. Listen to this, Brent, I’m sure you’ve seen it. “The media can be glad to the Biden white house’s return to normalcy, but let’s not be lulled. The commentary from TV broadcasters all day long was, at times, embarrassingly complimentary. Brent, I see no sign that the media is embarrassed with their flattering coverage. No sign whatsoever.

BOZELL: Were they flattered with their coverage of Barack Obama? Were they flattered with their coverage of Bill Clinton? No, they’re not going to be. Stuart, look, if a reporter wants to despise Donald Trump, especially when Donald Trump spent four years blasting them, they have every right to. But they don’t have any right to take that into the pages or on onto the airwaves.

By the same token, a reporter has every right to love Joe Biden, but they have no right to take that to the pages or the airwaves. You and I have talked for four years that they slanted the news against Trump. Well they are going to slant the news towards Biden. And I’ll tell you something else — mark my words at the start of this administration — You and I for the next four years are going to talk time and again about a major news story that the media whitewashed because it was negative against Joe Biden. Mark my words.

VARNEY: I agree with you. And, by the way, we’ve got a poll that shows only 46 percent of the people are, agree with or respect traditional media. Brent, I think that number’s going to go down. It’s going to get less and less.

VARNEY: Yep. I saw that. Brent Bozell, I gotta get more from you later on. Thanks for joining us this morning.